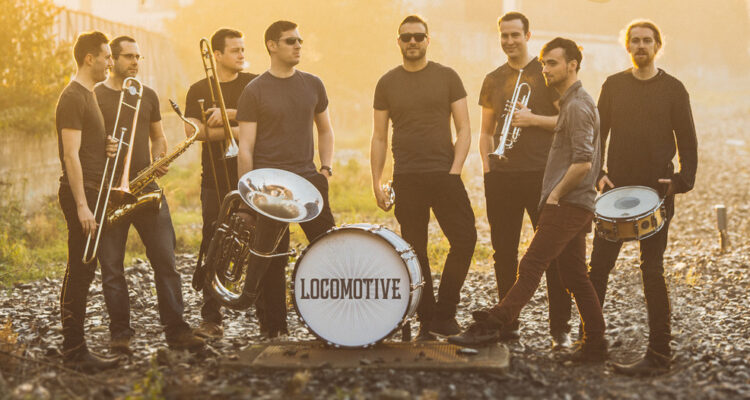 You can get the tickets here.

The 9-piece urban street-funk outfit, Stomptown Brass, are set to cap a whirlwind first year with the release of their debut EP on February 12th, accompanied by an Irish tour. Based in Dublin, Stomptown Brass have quickly become known for bringing a potent blend of raw energy and complex musical arrangements to venues around Ireland. A spate of standout gigs in the Sugar Club, Whelan’s, Vicar Street, Electric Picnic, Longitude and Indiependence has secured their reputation as a band that consistently brings crowds to their feet with funky high-energy original compositions.

Stomptown Brass began life just over a year ago when a group of like-minded brass players, known to each other from crossing paths with the likes of Trinity Orchestra, Hozier, The Riptide Movement, Kormac’s Big Band, Tandem Felix, Attention Bebe, among others, decided they wanted to do something different: find a way of merging the pure, direct energy of street-performing New Orleans brass bands with the subtle complexity of contemporary compositional arrangements.
The intention to break down the formal barrier between audience and performer means Stomptown Brass use a split kit (separate snare and bass drummers) so they can bring music right to the streets, not limited by the need to plug in, or even stay in the one place. This has led to numerous impromptu street parties over the last year – including a traffic-stopping march down South Richmond St. after Canalaphonic. Stomptown Brass can turn a post-work drink on a sunny evening along the canal into a New Orleans Mardi Gras festival. Their live gigs often end with half the band leaping off the stage, and blasting funky beats from chairs and tables.

The brain-child of composer and arranger James O’Leary (who taught himself the trombone for the express purpose of starting a street-funk brass band) the band has an almost-exclusive focus on original material. The songs draw on the rich tradition of funk and blues, creating a universally accessible, funky, direct, up-beat, fun kind of music, but with layers of rhythmic and dynamic complexity that reveals itself on repeated listens. Stomptown Brass hit you over the head with interesting arrangements that blend skillful composition with good-time party music.
The EP itself is made up of 4 tracks, 3 originals and one creative arrangement. It opens with the uncompromising title track Locomotive: a forceful wall of brass chords sets a contrast with the low growling of the tuba and trombones. The song grooves along with an almost filmic melody until the tuba hits you with growling multiphonic chords and the percussion starts to build in intensity and speed climaxing into a funky dancehall disco beat. An intense composition that presents what Stomptown Brass is all about.

The second track – My Duchess Has a Heart of Gold – punctures the heavy brass sound by featuring a military style vocal call and response. Lyrically, it is a funky ode to Dutch Gold, sung in the character of a junkie who has lived on the streets for too long. The groovy bass line never lets up as the syncopated rhythms add an unyielding sense of urgency to the track.

Next up is the most compositionally sophisticated track: Fury. Inspired by a famous Gregorian chant Dies Irae (Day of Wrath), Fury is a musical journey that opens with a frenetic melody set over impulsive rhythms. The song maintains this intensity up to the middle section where the tuba solo breaks into half time and the sax takes over, unravelling and exploring the original melody. The snare maintains a sense of unease that builds to a massive drop, impossible not to rock out to. Slowly, Fury builds its way out of this gnarling groove back to the impulsive and frenetic opening melody and ends without a chance to catch your breath.
The EP closes with a New Orleans twist on an Irish classic: The Auld Triangle. Arranged as a funeral dirge, the rolling snare opens as the trumpet enters with a sombre take on a well-known melody. Tradition in New Orleans dictates that once the band is out of sight of the grave side, the music breaks into the second-line: a jazzy, swing-time street party rendition of the dirge, and the Auld Triangle is no different. Trumpets and clarinet exchange interweaving melodies over a cacophony of trombone rasps and piccolo snare. An organ-like wall of chords ends the inventive and creative take on Brendan Behan’s Irish staple.

Stomptown Brass are doing something new and different, and doing it well. Catch them live as soon as you can.