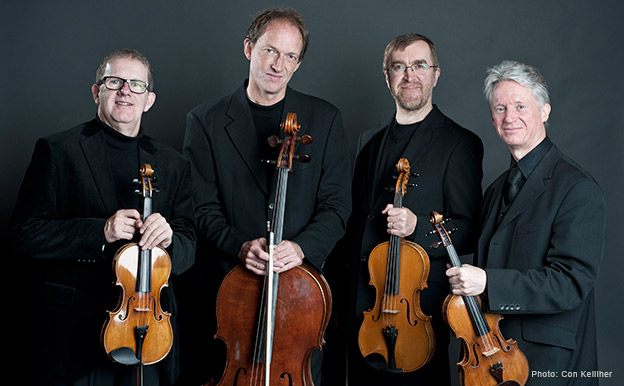 Awe-inspiring and infinitely moving… the kind of experience one encounters on only a few occasions in a lifetime… only one or two ensembles in the world plumb such depths. These were among the reactions of Strad magazine to the Vanbrugh Quartet’s twenty-fifth aniversary Beethoven cycle at London’s Cadogan Hall in November 2010. Winners of the 1988 London International String Quartet Competition, the quartet has enjoyed a busy international career which has taken them throughout Europe, the Americas and the Far East. The current season includes visits to the UK, Italy, Sweden, Russia, and the USA, with a tour of China and Korea planned for the Autumn.

Based in Cork as Resident Quartet to RTÉ from 1986-2013, and now supported by the National String Quartet Foundation, the Vanbrugh Quartet has dedicated itself to bringing string quartet music to audiences throughout Ireland, having given around one thousand concerts in venues ranging from small country schools to the major city venues. In 1996 the Quartet founded the West Cork Chamber Music Festival and the group has overseen its emergence as one of Europe’s most vibrant music festivals. The festival’s masterclasses have become a standard summer destination for Ireland’s most talented young chamber musicians and, supported in part by the Quartet’s own Scholarship Fund, more than one hundred players have already benefited from the experience of taking part. In April 2005 the Quartet planned and hosted European Quartet Week, an event which stood out as one of the most exciting and innovative of Cork’s tenure as European Capital of Culture.

The Vanbrugh Quartet has an extensive and critically acclaimed discography which includes the complete Beethoven quartets as well as numerous contemporary Irish quartets. Awards include Gramophone Critics’ Choice 2003 for Boccherini’s cello quintets and Gramophone Editor’s Choice (February 2006) for Charles Stanford’s viola and piano quintets, a CD released by Hyperion in co-operation with RTÉ. The Quartet’s latest CD, of works by Deirdre Gribbin, was released in 2013, forthcoming releases include works by Boris Tchaikovsky (Naxos) and John Kinsella (Toccata).

Tickets are free and available by telephone and over the counter from 10.00am on the day of the performance.