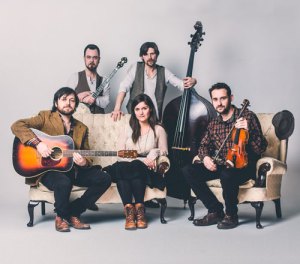 I have been listening to this group for the last 12 months and am really looking forward to their arrival in Cork next February.  Coughlans continue to provide and amazing range of music in their compact location on Douglas Street.

This Dublin five-piece don’t make mistakes. I Draw Slow showed that they had very definite ideas in their first two albums: old-time Appalachian roots with an Irish edge. White Wave Chapel doesn’t stray too far from this groove — and didn’t have to, because siblings Dave and Louise Holden have penned another 13 exquisite tracks.

As before, it is the latter’s voice and its luminous layers that make this so pleasant. Now You’re Gone, The Captain and Valentine, the current single, marginally sneak ahead in terms of musicianship and texture but all of White Wave Chapel is a songbook of accomplishment that is very lovely indeed.

Dublin roots band I Draw Slow have been drumming up enthusiastic reviews in Ireland since the release of their top 10 selling second album, Redhills. Irish national broadcaster RTE made Redhills album of the week and Redhills has been welcomed to the playlists of stations across the country.

However, their impact abroad is redrawing the map for these Irish/Americana songwriters.

I DRAW SLOW?s soon to be released 3rd album, WHITE WAVE CHAPEL is a creative progression for I DRAW SLOW. The sound is rooted in the style of the Appalachian Mountains and draws on the traditions of Irish music while incorporating all that?s great about modern Americana. I DRAW SLOW have created a whole new songbook of stories and melodies with this album. It features tales of dark and light, of debauchery and love, of trouble and joy that are sure to become firm favourites with their growing fan base at home and abroad.

They have been described in the UK press as ?American top league equivalents? destined ?to blow the opposition away?, drawing favourable comparisons with Gillian Welsh and Alison Krauss.

The band has played to audiences in the UK, Germany, Denmark and Belgium and started 2012 with a performance with the Legendary Béla Fleck and the Flecktones and an appearance at the Celtic Connections Festival in Glasgow Scotland. I Draw Slow is a five-piece outfit comprising vocals, guitar, fiddle, banjo and double bass.

The five have created a new sound, rooted in the old time style of the Appalachian Mountains, drawing on Irish traditional music and modern Americana. However, this is a whole new songbook of stories and melodies. These are dark tales of debauchery and trouble swinging from the kind of well-crafted melodies that survive.