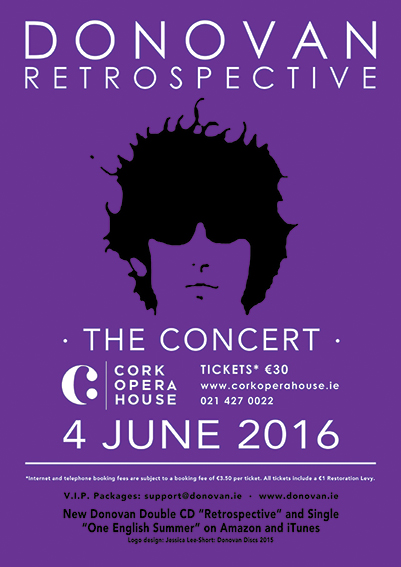 Donovan, ‘60s legend, icon, poet and one of our most enduring singer-songwriters – is proud to announce ‘The 50th Anniversary Tour’. Opening in his hometown Glasgow on October 3rd at The Pavilion, he also takes in the Cadogan Hall, London on October 31st and will continue through the UK, Germany, France and Ireland.

You will be treated to Donovan’s history of all his hits: ‘Sunshine Superman’, ‘Mellow Yellow’, ‘The Hurdy Gurdy Man’, Jenifer Juniper’ to name a few, plus also his legendary storytelling and cult songs. These shows will celebrate Donovan’s 50th year in the music business, which also include his recent album release ‘Donovan Retrospective’ and brand new single ‘One English Summer’ available on Amazon and ITunes.

This most auspicious anniversary will prompt a major renaissance for the man whose fingerprints can be seen throughout the last half-century of popular music. Donovan says “I am delighted to be going on tour in October, to thank all who have followed my work from the beginning and to all who have just discovered me.”

Donovan recently headlined the acoustic stage at Glastonbury (He had three special guests appearing with him: Jack Saveretti; Joolzy Leitch from his own band Public Overdrive (Brian Jones grandson) and Lou Rhodes from Manchester band LAMB.

He was 18 years old when he had his first hit, ‘Catch The Wind’, for which he received the prestigious Ivor Novello Award, and since then the man born Donovan Leitch in Scotland in 1946 has been pop star and folk troubadour, a flag bearer for all things psychedelic, and one of the early adopters (and subsequent promoters) of Transcendental Meditation, now one of the most recognized, and practiced, meditation techniques in the world.

Following his first Top 5 record, Donovan scored 10 other hit singles ‘Colours’, ‘Universal Soldier’, ‘Sunshine Superman’, ‘Mellow Yellow’, ‘The Hurdy Gurdy Man’, ‘Lalena’, Jenifer Juniper’, ‘There is a Mountain’; Wear Your Love Like Heaven’, ‘Barabajagal’ and ‘Atlantis ’. Donovan was inducted into The Rock & Roll Hall of Fame in 2012 and The Songwriters Hall of Fame in 2014, and received The Mojo Maverick Award from Jimmy Page. In many ways, his career has been a series of firsts. In addition to creating the first psychedelic album (Sunshine Superman in 1966), he was the first ‘Rolling Stone Interview’ in the first issue of Rolling Stone magazine in 1967. He was the first solo artist to sell out Madison Square Garden, and coined the phrase ‘Celtic Rock’. And he is surely the first, and arguably the only, artist to have influenced both Led Zeppelin and Belle and Sebastian, among so many others. Thousands of cover versions of his songs attest to his importance as a songwriter and recording studio innovator. His unique work continues to influence new bands and singers. That’s quite a breadth of accomplishment. But then breadth was what he always did best.

His album Sunshine Superman (1965/1966) introduced Flower Power to the world and influenced his friends, The Beatles to create their 1967 album Sgt. Pepper, and he contributed lyrics to their songs. He taught John Lennon, Paul McCartney and George Harrison to finger pick the guitar on their famous trip to India to study Transcendental Meditation. George Harrison later said of their friend, “Donovan is all over The White Album”.

For over 45 years and up to the present day, his evocative songs are consistently requested for major films, hit TV series and top commercials, spreading his work further into new audiences. It’s all a long way from that heady decade that birthed him, but 2015 will confirm Donovan as so much more than a mere heritage act. He is the history of British rock and pop distilled into one man. He is an institution, and his legacy and influence will ensure that he is part of its future, too. Don’t miss out…